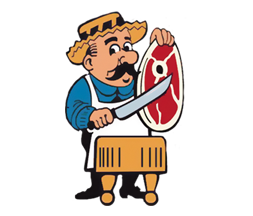 Hog Dogs
Our hot dogs are fully cooked so they just need to be reheated.

Brats
There are several ways to cook brats.  We prefer grilling brats, but some like to boil in beer and finish them on the grill.

Regardless of cooking method, make sure they cook to an internal temperature of 145⁰ F.

Oven: place in covered dish; add water to cover the bottom; bake covered in 325⁰ oven for about 1 hour.  You  may also top with Cream of Mushroom Soup or Cream of Celery Soup before simmering or baking.

Smoked Pork Chops
The smoked pork chops are fully cooked.  Simply  heat and serve.  They can be heated on the grill.  See the recipe tab for a Honey Mustard Glaze.

Tri-Tip Roast
We prefer grilling the Tri-Tip Roasts.  Begin by searing the roast on both sides on high heat.  Reduce the grill temperature to 300-325⁰ F.   Grill covered, for 15-30 minutes depending on the thickness of the roast.  Remove the roast from the grill when the internal temperature reaches 130⁰ F.  Cover the roast with foil and let it rest for 15 minutes before slicing.  Slice across the grain in 1/4″ thick slices.  Don’t overcook or the roast will be tough.  Leftover slices are great on a lettuce salad with your favorite toppings and dressing.

Whole & Half Ham
We generally recommend 1/2# per person for a bone-in ham.  Take into account if you would like leftovers.

The hams are fully cooked, so you only need to heat them through.  To reheat a fully cooked ham:

Ham Slices
The ham slices are fully cooked, so you only need to heat them through, either in the oven, in a skillet, on the grill or even in the microwave.

Cooking instructions: The night before you are going to cook the prime rib, unwrap the roast and let it sit uncovered in the refrigerator. Three hours before you want to begin cooking, take the roast out of the fridge and place it on a cutting board at room temperature. Then thirty minutes before you start roasting, pre-heat oven to 450° F and season the roast generously with Kosher salt and freshly ground pepper.  (We also sell Excalibur Prime Rib Rub which is very good.)   Set the roast in a roasting pan with a rack, fat side up for boneless prime rib. Roast for 20 minutes; then lower the heat to 325° F. and roast until the meat’s internal temp reaches 120° F.  This will take another hour to 3.5 hours depending on the size of your roast.   A guideline is 15 more minutes per pound.  (Insert meat thermometer into the deepest part of the meat.) When the temp reaches 120° F, take it out of the oven and transfer to a cutting board.  Leave the thermometer in.  Cover with foil and let it rest for 15-20 minutes, during which time the temp will continue rising to around 130° F.  (which is perfect for medium-rare) and then drop back down to 120° F.  When it reaches 120° F, it’s rested and ready to slice & serve.  Serve with AuJus and your favorite Horseradish.

Crown Roast
The minimum number of bones for a tied crown roast is 14.  The maximum is 16 bones.  We recommend 1 bone per serving.

Minnesota Chops
Minnesota Chops are boneless pork chops, tenderized and seasoned with our BBQ Seasoning.  You can pan fry, bake or grill (preferred).  They are tenderized and therefore they don’t take long to cook.  Eat them as is or put on a sub bun with lettuce, tomato, onion and mayo.

Country Style Ribs
These are best topped with BBQ Sauce.  Regardless of the method, low and slow is the key.

Oven: put on foiled lined pan or roasting pay and bake for at least 3 hours in 250⁰ oven, basting with BBQ sauce after the first 90 minutes and again every 30 minutes.  They are done when they start falling off the bone.

Crockpot: smother with BBQ Sauce and cook on low for 6-8 hours.